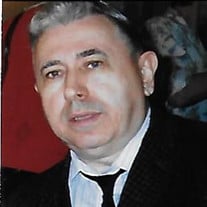 Billy Hoyt Northcutt, Age 82, of Malden , Missouri, died March 9, 2017 at St. Bernard's Medical Center, Jonesboro, Arkansas. Billy was born May 12, 1934 near Tyler, Missouri. His Parents were Malcolm R. Northcutt and Lennie M. Faulkner and both are deceased. One sister, Kathrene D. Kinworthy is deceased. Billy is survived by three sisters: Imogene Pennington of Chesterfield, Missouri; Brenda D. Underwood of Wappapello, Missouri; and Theresa J. Frost of Puxico, Missouri. Billy lived in Gideon during his early years, then moved to Malden where he attended High School. Billy played Basketball and was a member of the track team which won both County and State medals in 1952. He served on the yearbook staff and the school newspaper staff. He was voted most popular and best dressed senior. He also served on the student council and as Class President for one year. After high school, Billy attended Harris State University in St. Louis and earned an Associate Degree. He then attended Washington University in St. Louis for 1 year . Later, he enrolled in LaSalle Law School of Chicago, Illinois and earned and L.L.B. degree. Billy served 2 tours in the U S Army Signal Corp between 1957 and 1963. During his service, he earned the US Armed Services Ribbon, the Good Conduct Medal, the Expert Rifle and Marksman medals and the Small Arms medal. He was honorably discharged in March, 1963. During his work career, Billy served trucking companies, railroads, and air cargo carriers by providing business analysis and legal work for tariffs and other requirements. For the last 20 years, Billy was president of his own company, Land Entry, Inc. , an oil, gas and mineral land firm doing business in several states. He enjoyed extensive travel for his company business.

The family of Mr. Billy Hoyt Northcutt created this Life Tributes page to make it easy to share your memories.

Send flowers to the Northcutt family.