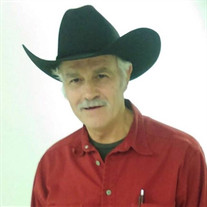 David Ray Scogin 69, died unexpectedly on January 13, 2020. Born to Raymond and Juanita (Campbell) Scogin at home, at the end of Drybone Road in Miffin, Ohio. The country doctor that delivered him, was a classmate of his mothers. While spending time at the A&W Root Beer Stand in Piggott, Dave admired from afar, a beautiful young lady in a tree. In time they were writing letters back and forth, where he eventually invited her to a chaperoned meeting. When he came to pick Pat up for their first date, her mom said “Girl, I’ve had that brown eyed handsome man picked out for you for a long time”. Soon after in 1973 he fell in love and married his best friend Patsy Kay Ross. Dave and Pat have celebrated over 46 years of marriage. Our hearts are breaking today as we realize the depth of our loss. Dave was a good man, a devoted husband and a cowboy at heart. He and Pat lived in Greenway from 1974 to 2004. In 2002 they discovered a beautiful spot in the woods West of Piggott, where they worked together for 18 months to build their home known as “Leanin Tree”. In 2004 Dave, Pat, and all their babies moved into their dream home. He also loved old cars and shared them with others each year at the Piggott Car Show. Dave was baptized as one of Jehovah’s Witnesses January 21, 1973. Together he and Pat shared their ministry with the Piggott Congregation of Jehovah’s Witnesses. He was preceded in death by his parents Raymond Lucion Scogin and Juanita Louise Campbell Beaver; two brothers Richard Scogin and Ron Scogin; one sister Mary Overli and one step sister Rhonda Beaver. Dave is survived by his wife Pat Scogin of Piggott, Arkansas; two brothers Bob Scogin of Elgin, Texas and John Scogin and wife Chris of Washington State; one step brother Denny Beaver of Piggott, Arkansas; three sisters Loucella Solis of Washington State, Tammy Sabin and husband David of Graham, Washington and Ruthie Scogin of Carbonado, Washington; two step sisters Debbie Beaver of Piggott, Arkansas and Donna Smith of Heber Springs, Arkansas; and a host of nieces, nephews and friends. Memorial Service will be at 4:30 pm on Sunday January 19, 2020 at Kingdom Hall of Jehovah’s Witnesses located at 1415 US 49 in Paragould. Tri-City LLC Crematory Funeral Home is honored and privileged to serve the family of David Scogin. Online condolences may be expressed at www.Tri-CityLLC.com.

David Ray Scogin 69, died unexpectedly on January 13, 2020. Born to Raymond and Juanita (Campbell) Scogin at home, at the end of Drybone Road in Miffin, Ohio. The country doctor that delivered him, was a classmate of his mothers. While... View Obituary & Service Information

The family of Mr. David Ray Scogin created this Life Tributes page to make it easy to share your memories.

Send flowers to the Scogin family.