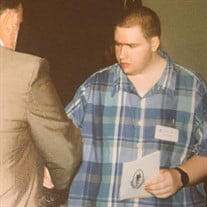 David Scott Sheley passed this life on January 1, 2020, in his home in Gosnell, Arkansas. David was born to Fredrick Sheley and Martha Sheley on September 17, 1971. David’s dad died when David was three years of age. He lived with his mother in Gosnell, Arkansas, Louisiana and Illinois. When David was 15 years old his mother passed, at which time David moved to Gosnell, Arkansas, and remained there until his death. David was very intelligent and could remember anything. He loved writing long letters, which were very hard to read, however, he would give you the letter then tell you everything that he had written. David had many adventures and a huge imagination. David attended the Gosnell School District. He received his GED from Arkansas Northeastern College, and gave a speech at his graduation. I had the privilege of attending his graduation and he did an outstanding job. David loved the Lord. He read his Bible and loved listening to Christian music. He attended Gosnell Baptist Church, Pathway Church, and Bethany Baptist Church at different times during his life. At the time of his death he was not attending any church due to health issues. David was very appreciative to the people that cared for him. He has had several people that were faithful in taking him to get groceries over the years. Over the past few years his neighbor, Mr. Metcalf, filled those shoes. David really appreciated all that Mr. Metcalf did for him from taking him to the store, taking him out to eat, helping him with repairs on his house, and celebrating his birthday with him. David was a part of my family’s lives from the time he reached age 15 until his death. If he ever needed anything he would have people to call me and I would try to help him. I took David to get his driver’s license. I have been very lucky to be a friend to David. He always was very honest. If I did something that he did not like he would let me know. If I did something he liked he would let me know and tell me how much he appreciated what I had done for him. Each year for Christmas David would make me a list of what he wanted. He was very specific to tell me he wanted 52 razors (one for each week), 3 cans of shaving gel, 100 stamps, a case of 12 air conditioner filters (make sure you get the right size), etc. One year I made candy and took it to him, and he informed me not to make him anymore. Knowing David was any adventure. I’m so glad I got to be a part of his life even though there were many hard times. I am glad he is now at peace in heaven with the Lord. David was cremated and his ashes will be buried beside his mother in Dresden, Tennessee, at Macks Grove Baptist Church Cemetery. God bless you David. I’m so glad you have peace now. Tri-City LLC Crematory Funeral Home is honored and privileged to serve the family and friends of David Sheley. Online condolences may be expressed at www.Tri-CityLLC.com .

David Scott Sheley passed this life on January 1, 2020, in his home in Gosnell, Arkansas. David was born to Fredrick Sheley and Martha Sheley on September 17, 1971. David&#8217;s dad died when David was three years of age. He lived with his... View Obituary & Service Information

The family of Mr. David Scott Sheley created this Life Tributes page to make it easy to share your memories.

Send flowers to the Sheley family.