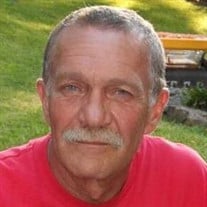 Donald Herbert Henderson better known as “JD” died unexpectedly on August 11, 2019 in Blytheville. Our hearts are breaking today as we realize the depth of our loss. JD was bigger than life, smart, bold, opinionated, controversial, outgoing, wild, and full of laughter. He never met a stranger and never forgot a face. JD was born on September 5, 1956 in Altoona, Pennsylvania to David and Gladys Henderson. In 1978 his employer Western Geophysical brought him to Arkansas for oil field exploration. In 1979 at a Charlie Daniels concert he spotted this beautiful red head that would change his life forever. In June of 1980 he married his best friend and love of his life, Sharal Storey Henderson. Passionate, loving, proud, and forthright, JD was a husband, daddy, papaw, son, brother, uncle, nephew, and a friend to many. In February of 2017 JD gave his heart to the Lord at No Fences Cowboy Church of Morgan County in Faulkville, Alabama. In 2003 JD began his career with Nucor as a Caster Mechanic in Decatur, Alabama and in April of this year transferred to Nucor Steel Arkansas as a Cold Mill 2 Mechanic. JD was one of a kind – a big-hearted man who loved hunting, fishing, Nascar at Talladega, his collection of Harleys and Alabama football….Roll Tide! Above all of that he cherished and adored his family. When his girls were young Jessica and Elizabeth would get excited for Dads driving lessons every Sunday, they hit the gravel roads. He was always excited about the family camping on Spring River. One lasting memory everyone recalls was when he couldn’t get the campfire going fast enough for the girls, he poured a little gasoline on it. The initial explosion not only echoed through the hills it burned all the hair off JD’s legs leaving him to sit by the fire with his legs in a cooler of ice water all night. One thing for certain dad always made sure we explored and had a great time. As Papaw he loved cheering on Drake and Brody while they played their sports and Gabe and Marlie while showing steers at the livestock shows. JD was preceded in death by his father David Henderson and sister Linda Henderson Rahm. He is survived by his wife Sharal Henderson of Cherokee Village; two daughters Jessica Henderson Morris (David Joe) of Manila, Arkansas and Elizabeth Henderson Thornley (Neil) of Buffalo, Texas; his mother Gladys Henderson of Bedford, PA; Six grandchildren Tristan Thornley Brewer, Bryce Thornley, Gabe McLemore, and Marlie Thornley all of Buffalo, Texas, Drake Morris and Brody Morris both of Manila, Arkansas; one brother Galen Henderson (Tina) of Bedford, PA; three sisters Sally Henderson Peck of Hollidaysburg, PA, Debbie (Dennis) Smolen of Butler, PA, Lisa (Doug) Tapager of Butler, PA; A very special aunt Beverly Henderson Dibert of Hollidaysburg, PA; Mother-in-law Trula Stanfill Ball (Bill) of Cherokee Village, Arkansas; along with a host of nieces, nephews, cousins, & friends. A Celebration of Life will be held on Friday at Howards Funeral Chapel in Manila with visitation beginning at 2pm and service at 3pm. The family would like to say a special thank you to JD’s Nucor family. You are amazing and we truly appreciate your thoughtfulness and friendship. Tri-City LLC Crematory Funeral Home is honored and privileged to serve the family of JD Henderson. Memories and condolences may be shared with the family at www.Tri-CityLLC.com .

Donald Herbert Henderson better known as &#8220;JD&#8221; died unexpectedly on August 11, 2019 in Blytheville. Our hearts are breaking today as we realize the depth of our loss. JD was bigger than life, smart, bold, opinionated, controversial,... View Obituary & Service Information

The family of Mr. Donald "JD" Herbert Henderson created this Life Tributes page to make it easy to share your memories.

Send flowers to the Henderson family.