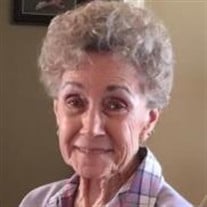 On the 15th of May 2021 Elizabeth Jane Hensley 79, of Jonesboro, stepped out of her earthy shell into her new glorified body. When ask of her religious affiliation she would proudly proclaim I am a child of God. To all that knew her, she was feisty, classy and sassy. She possessed a zest for life and always said “Live your life so that at the end you’ll have no regrets”. Elizabeth grew up in Caraway, Arkansas one of seven children born to Bert and Ila Hensley. She continued her education in beauty school and became a beautician and cosmetology instructor. During her instruction she met Vidal Sassoon, hairdresser, and trendsetter. She became one of his models for various shows throughout the United States. She attended Woodstock, was one of few licensed female pilots and even bought an airplane. Not only did Elizabeth own No. 53 1953 Corvette, she also raced it and has the trophy to prove it. In 2010 Elizabeth and her daughter Deborah flew from New York to Germany to attend The Oberammergau Passion Play. From there they traveled to Milan and Paris where she celebrated her 70th birthday eating a cupcake at the top of the Eiffel Tower. She was an energetic and vivacious woman who was admired for her honesty and integrity. She was exceptional at embroidery quilting, crocheting & knitting. Elizabeth was an avid reader and became fascinated by genealogical research which led to tracing family ancestry all the way back to Noah’s son Japheth. More special events…more special people in her life here on earth...far too many to list. It can truly be said that she was loved by many and will be greatly missed. She was preceded in death by her parents Bert and Ila (Edwards) Hensley; two brothers Charles L Hensley and D. Wayne Hensley; and one sister Doris Rhuedell. Elizabeth leaves behind to cherish her memories her beautiful daughter Deborah (Rick) Dono of Austin, TX; two grandsons Jourdan (Jillian) Simmang and Zachery Simmang both of Austin, TX; one great granddaughter Aurila Simmang; one brother Robert (Bonnie) Hensley of Caraway, AR; two sisters Medrith (M. Dwaine) Groves and Sharon Charolla both of Jonesboro, AR; along with many nieces, nephews, and lifelong friends. There will be a graveside service at a later date so expressions of sympathy should be sent directly to the family. Tri-City LLC Crematory Funeral Home is honored and privileged to serve the family of Elizabeth Hensley. Online condolences may be expressed at www.Tri-CityLLC.com .

On the 15th of May 2021 Elizabeth Jane Hensley 79, of Jonesboro, stepped out of her earthy shell into her new glorified body. When ask of her religious affiliation she would proudly proclaim I am a child of God. To all that knew her, she... View Obituary & Service Information

The family of Ms. Elizabeth Jane Hensley created this Life Tributes page to make it easy to share your memories.

Send flowers to the Hensley family.