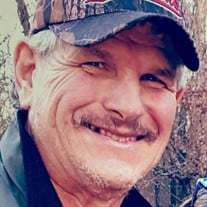 Garry Wayne Thomas, 60, of Jonesboro passed unexpectedly from this life on May 30, 2020. He was born in April of 1960 in Watervliet, Michigan, to Franklin and Willie Thomas. He married the love of his life and best friend Patricia Lynn Raborn in June of 1979. This month they would have celebrated 41 years of marriage. He was a tender, dear, sweet man. He was a great husband, father, grandfather and friend. He will be sorely missed by all. Garry worked at Riceland Foods, in Jonesboro, for 40 years until his retirement. He enjoyed watching westerns, classic TV and his favorite “The Andy Griffith Show”. He was a sports fanatic. Garry was serious about football and has always been a diehard Razorbacks fan. He was an avid outdoorsman who enjoyed hunting, camping fishing, and being on the water. Most of all, he cherished the time that he spent with his family grilling, playing horseshoes & basketball. He is preceded in death by his father Franklin Otis Thomas, his mother Willie Pearl Coots and step father James Coots; two sisters Jessica Partain and Tammy Findley; brother in law Wayne McGinnis; sister in law Beverly Thomas; one step brother Bill Isom and one step sister Linda Jones. Garry leaves behind his wife, Patricia Lynn Thomas of Jonesboro; one son Garry (Amber) Thomas II of Jonesboro; two daughters April Williams and Melissa Partain both of Jonesboro; grandchildren Jayln and Blake Williams, June, Grace and Ajay Ogles, Kylen and Emily Thomas and Taylor Burton all of Jonesboro, Logan Dawson Thomas, Kaden Thomas and Baylee Thomas all of Des Arc, Arkansas; step mother Willie Jean Thomas of Jonesboro; two brothers David Thomas and Donald Thomas both of Jonesboro; three sisters Brenda McGinnis and Debbie (Vernon) Findley both of Jonesboro and Becky Gatewood of Missouri; one step brother Rick Isom and one step sister Patricia Isom both of Jonesboro; 18 nieces and nephews; a host of great nieces, nephews, and friends. Garry’s final request has been honored by his family having a private Celebration of Life. Expressions of sympathy may be sent directly to family. Tri-City LLC Crematory Funeral Home is honored and privileged to serve the Thomas Family. Online condolences may be expressed at www.Tri-CityLLC.com.

Garry Wayne Thomas, 60, of Jonesboro passed unexpectedly from this life on May 30, 2020. He was born in April of 1960 in Watervliet, Michigan, to Franklin and Willie Thomas. He married the love of his life and best friend Patricia Lynn Raborn... View Obituary & Service Information

The family of Mr. Garry Wayne Thomas created this Life Tributes page to make it easy to share your memories.

Send flowers to the Thomas family.