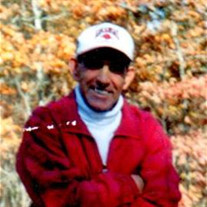 Jerry D. "Rudy Muck" Simpson, 77, of Paragould, passed away on Tuesday, February 9th at Flo and Phil Jones Hospice House in Jonesboro. He was preceded in death by his mother, Rose Downing; sister, Sandra Kingsbury; and son, Ted Simpson. Jerry was born in Manila, Arkansas, and retired from Southern Pioneer Insurance in Trumann. He worked many years with the Boy Scouts of America as the District Scout Executive and assisted with placing the American Bald Eagle at Greene County Tech to become their official mascot in 1979. Golfing, refinishing furniture, spending time at the lake, visiting with family and many friends, and entertaining his grandchildren with his musical talents and with his knowledge of flora and fauna are some of the many things he enjoyed. Survivors include his wife, Sue Simpson; children, Todd (Dana), Tim (Susan), Paul (Jelua), and Phillip (Tanya) Simpson; grandchildren, Matt, Whitney, Amber, Chris (Alyssa), and Megan Simpson, and Ryan Gordon; as well as his devoted caretaker, Rick Phelps. The family will host a memorial at a later date. Donations in memoriam can be made to the NEA Humane Society.

The family of Mr. Jerry D Simpson created this Life Tributes page to make it easy to share your memories.

Send flowers to the Simpson family.