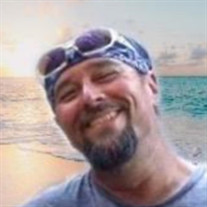 Kenneth Floyd Brown 55, died peacefully July 27, 2020 at his home in Manila. He was born on November 29, 1964 in St. Louis, Missouri to Floyd and Ruby Brown. He was one of the original icons of Blytheville, a legend, “Downtown Kenny Brown”. Kenny had a contagious smile that lit up the room. He was larger than life, outgoing, wild, and full of laughter. He never met a stranger and never forgot a face. He spent most of his career at Kinder Morgan in Blytheville. Kenny was one of a kind – a big-hearted man who loved his family, friends, and the Lord. He enjoyed riding his Harley with his biker brothers and going to rally’s. He had a love for traveling, golf, sports cars, and the beach. Kenny adored the ladies and the ladies adored him. He was very loved and admired by friends and family. He was a character. They say only the good die young. Kenny had a good heart and the Lord needed him home. He was preceded in death by his parents Floyd and Ruby (Sprouse) Brown; one daughter Ruby Brown; a niece Brandi Rash and all maternal and paternal grandparents. Kenny is survived by his wife Kristin Sandman Brown of Anderson, IN; four daughters Anita (Chris) Johnson of Arizona, Natalie (Brandon) Dubois of Cabot, AR, Rebecca Quintana of Hardy, AR and Kaley Blankenship; five grandchildren Haley, Brayden, Emma, Jude, and Maeve; five sisters Janette Hojanaki of Blytheville, AR, Linda Gray of Manila, AR, Kristi and brother in love Dan Harvey of Jonesboro, AR, Tammy Brown of Manila, AR and Jessica Brown of Blytheville, AR; three nieces Kiara Simmons, Josie Edwards and Jayden Thompson; five nephews Shawn Brown, Adam Hojanaki, Charles Hinklin, Jordan Thompson and Julius Thompson; his three cats Sissy, Lover Boy, and Fathead; along with a host of cousins & lifelong friends. A Celebration of Life will be held on Saturday August 1st at Wilson Funeral Home in Blytheville with visitation beginning at 1:30 pm and service at 2 pm. Tri-City LLC Crematory Funeral Home is honored and privileged to serve the family of Kenny Brown. Memories and condolences may be shared with the family at www.Tri-CityLLC.com .

The family of Mr. Kenneth Floyd Brown created this Life Tributes page to make it easy to share your memories.

Send flowers to the Brown family.