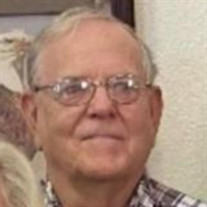 On November 14, 1949, Lewis T Smith was born to Claude Harvey and Anna Mae Smith. Their fourth child and first-born son, he was born at home, in a house at the top of a hill just two miles outside of Campbell, MO. Claude Smith had purchased... View Obituary & Service Information

The family of Mr. Lewis T Smith created this Life Tributes page to make it easy to share your memories.

Send flowers to the Smith family.