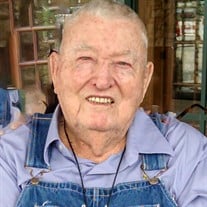 Marvin Adell Foster of Rector peacefully took his last breath on earth and his first in heaven on Saturday evening June 5, 2021. He told his family he couldn’t wait to get to heaven, he had a couple of questions he wanted to ask Jesus face to face. He was born March 19, 1925 in Blue Cane, Arkansas to the late Marvin and Ruth Foster. Marvin was a true a patriot in every sense of the word. He served during WWII in the United States Navy as a Trainer on 40 Millimeter Gun Landing Ship aboard USS LSM 474 in the Pacific Ocean in 1945. Ordained in 1954 Marvin was a Pastor for over 50 years serving in Arkansas, Missouri, Indiana, Michigan and Florida. He also spent many years as a barber in the Rector area. He was a member of the First General Baptist Church. Marvin will be remembered for his faith in God, devotion to his family, his gift of good humor and great story telling. He was a man of great intellect who had a sharp mind for business. He was both frugal and practical, and enjoyed going to auctions to see what treasures he could find. He never met a stranger and never forgot a face. Marvin always took time to speak to people, shake their hand and look them in the eye. He valued hard work, honesty, and the value of a man’s word. He was preceded in death by his best friend and wife of over 50 years Dorothy Mae Foster, his son Steven Ray Foster and his parents Marvin and Ruth (Edwards) Foster. Marvin is survived by nine children Diane Glynn and Debbie (Jerry) Miracle both of Henderson, NV, Marsha (Bob) Ison of Farwell, MI, Carol (Gene) Barnes of Lamar, AR, Pat (Jerry) Benson of Rector, AR, Randy (Andrea) Foster of Holly, MI, David (Dixie) Batchelor of Oxford, MI, Mark (Su Yung) Foster of Dayton, OH and Marvin (Aimee) Foster of Stuart, FL; his brother Charles (Linda) Pruett of McKinney, TX; many grandchildren and great grandchildren; Marvin was a dedicated family man and a true friend to many, he will be greatly missed. Marvins wishes have been honored. There will be a private family celebration at a later date. Expressions of sympathy should be sent directly to the family. Tri-City LLC Crematory Funeral Home is honored and privileged to serve the Foster Family. Online condolences may be expressed at www.Tri-CityLLC.com .

Marvin Adell Foster of Rector peacefully took his last breath on earth and his first in heaven on Saturday evening June 5, 2021. He told his family he couldn&#8217;t wait to get to heaven, he had a couple of questions he wanted to ask Jesus... View Obituary & Service Information

The family of Mr. Marvin Adell Foster created this Life Tributes page to make it easy to share your memories.

Send flowers to the Foster family.