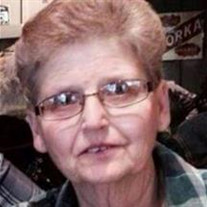 Phyllis Y. (Davidson) Stout of Temple, Texas was born in Manila, Arkansas on August 14, 1954. Phyllis passed away in Temple, Texas on January 12, 2016. She worked many years as a social worker in Temple, Texas. Phyllis was a very compassionate... View Obituary & Service Information

The family of Mrs. Phyllis Y. (Davidson) Stout created this Life Tributes page to make it easy to share your memories.

Send flowers to the Stout family.