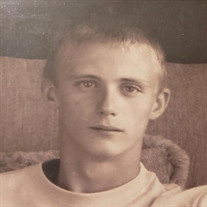 Raymond Ronald Rowland McGinnis passed away peacefully with his family by his side on Wednesday July 29, 2020 at his home in Cash, Arkansas. He was a very talented and gifted 32 years old young man. Ray as a toddler didn’t speak till he was 3 then he never shut up. He just sounded the same syllables twice no matter what he was trying to say. He began to experiment with electricity at a very young age by sticking scissors in light sockets. When he was about 3 or 4 he vanished. Family, friends and law enforcement began searching the 27 acre Watershed Lake and 12 acres of woods shouting his name however there was no sign of this precious boy. Carmaletia (his Ninny) exhausted walked in their home right as the door to the built in curio cabinet fell off. The little stinker had been in there the entire time removing the screws one by one. He was so proud of himself. When he was 7 he talked his cousin Blake into testing a 9 volt battery by sticking it to his tongue. He giggled as Blake screamed. By the time he was in the 3rd grade he was writing programs for Westside Schools to use. When he was 12 years old, under the instruction of his grandpa, he took a motor out of a truck and put a new one in. He put it all back together every bolt and every wire. Ray never stayed clean he was always covered in grease from working on something. His Ninny washed his clothes in Mean Green. She called the family on his graduation day to celebrate, so they could see this handsome young man shine. He graduated from Westside High School in 2005 and continued his education at Black River Technical College earning his degree as an Automotive Electrician in 2008. Through his training and life experiences, he took quite well to learning everything there is to know about engines and mastering his craft in auto/diesel mechanics. He was employed by Simpli Auto and continued running his own business of B&K Mobile Mechanic. Ray loved the outdoors, hunting, fishing, camping, being off the grid with his family and close friends. He leaves us knowing the great lessons of gratitude, humility, and love. He was preceded in death by his paternal grandmother who raised him Carmaletia Wilson his Ninny. Ray leaves behind his best friend and wife Kathern McGinnis of Cash, AR; four children Kayden Lehman and Brantlee McGinnis of Bono, AR and Cayden Stiles and Jailyn Norris of Cash, AR; his mother Cynthia (Stephen) Johnson of Bono; mother in law Lynn Trichel of Cash, AR; grandpa Dan Wilson of Bono, AR; two brothers Christopher McGinnis of Bono, AR and Jonathan Rowland of Walnut Ridge, AR; four sisters Sasha Marie (Rodney) Clements of Brookland, AR, Brittany Rowland of LA, Felicia Jackson of Jonesboro, AR and Kamryn Langham of Tulsa, OK; he also leaves behind aunts, uncles, nieces, nephews and a large group of loyal friends who have loved and supported him and his family. There will be a private family memorial so expressions of sympathy should be send directly to the family. Tri-City LLC Crematory Funeral Home is honored and privileged to serve the family of Ray McGinnis.

Raymond Ronald Rowland McGinnis passed away peacefully with his family by his side on Wednesday July 29, 2020 at his home in Cash, Arkansas. He was a very talented and gifted 32 years old young man. Ray as a toddler didn&#8217;t speak till... View Obituary & Service Information

The family of Mr. Raymond Ronald Rowland McGinnis created this Life Tributes page to make it easy to share your memories.

Raymond Ronald Rowland McGinnis passed away peacefully with his...

Send flowers to the McGinnis family.