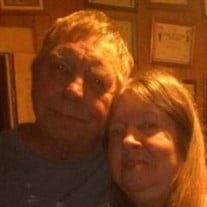 Ronald Keith Cannon 67, left this world for his heavenly home on July 26, 2020. He was born February 28, 1953 in Blytheville, Arkansas. Ronald spent most of his career as an auto mechanic working in Osceola at Beardsley’s Garage for his best friend Bobby Beardsley. He had a positive attitude towards life and a great sense of humor. He was a big cut up, a jokester, whenever Ronald was around you knew there would be lots of laughter. He enjoyed fishing and hunting and was always talking smack, keeping everyone on their toes wondering what he was up to next. Having a heart of gold, Ronald would do anything he could for you, even give you the shirt off his back. And he never knew a stranger. If you were a friend of his he treated you like you were family. He was preceded in death by his best friend and wife of 43 years Teresa Ann Cannon; his daughter Teena Ann Cannon and his grandparents Clarence and Minnie Pearl (Holt) Daniels. Ron leaves behind his dear sweet momma Bernice (Daniels) Cannon of Blytheville, Arkansas; his son Taylor Cannon of Blytheville, Arkansas; his daughter Tonyia (Robert Essig) Cannon of Blytheville, Arkansas; seven grandchildren Tabitha Wooldridge, Nicholas Wooldridge and William Wooldridge all of Mountain Home, Arkansas, Vincent Garland of Searcy, Arkansas and Randy Cannon, Shannon Brewer and Danielle Brewer all of Blytheville, Arkansas; one brother Thomas (Cindy) Troup of Shreveport, Louisiana; two sisters Sheila Carrol of Blytheville, Arkansas, Linda (John) Bird of Shreveport, Louisiana and half sister Teresa Johnson of Missouri; along with a host of nieces, nephews, and lifelong friends. Ronald’s final request has been honored. Expressions of sympathy may be sent directly to the family. Tri-City LLC Crematory Funeral Home is honored and privileged to serve the Cannon Family. Online condolences may be expressed at www.Tri-CityLLC.com.

Ronald Keith Cannon 67, left this world for his heavenly home on July 26, 2020. He was born February 28, 1953 in Blytheville, Arkansas. Ronald spent most of his career as an auto mechanic working in Osceola at Beardsley&#8217;s Garage for his... View Obituary & Service Information

The family of Mr. Ronald Keith Cannon created this Life Tributes page to make it easy to share your memories.

Ronald Keith Cannon 67, left this world for his heavenly home...

Send flowers to the Cannon family.