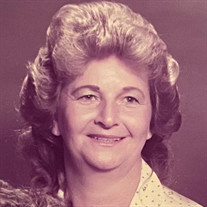 Vera Walline Remagen 84, of Jonesboro passed away at her home on Monday, 26th of April 2021. Born on the 19th of April 1937 in Dexter Missouri, she grew up in Northeast Arkansas and was a graduate of Nettleton High School. After high school she moved to California where she had a successful career of over 40 years as a checker for Lucky’s Super Market in the San Fernando Valley. Vera was known for her infectious laughter, beautiful smile, free spirit and colorful personality. She was a lady of courage and determination raising five children on her own. She was an avid fan of the Los Angeles Roller Derby and the Los Angeles Lakers. Vera never met a stranger or forgot a face and was constantly running into people she knew. After retirement she returned home to Jonesboro. Vera was an avid Fenton Glass Collector of bells, baskets and vases. As long as her health allowed, she looked forward to her classmates luncheons, especially visiting with Roy and Joy Coble and Martha and Don Chesser. She was preceded in death by her Parents W.T. and Vera (McElyea) Jones, three brothers Charles “Big Boy” Jones, Jerry Jones and Larry Jones; two sisters Dora Lee Jones and Mary Jones; and a daughter Denise Dickson. Vera is survived by four children David Eugene Jones of Jonesboro, Paul “Butch” Remagen of Maple Falls, WA, Cindy Remagen of Paragould, AR and Donna Remagen of Lancaster, CA; two grandchildren Heidi McCalla of Paragould, AR and Alena Dickson of Las Vegas, NV; three great grandchildren Ricky Love, Kashmoney Pride and Crystal Richardson; one great-great grand child Baylee Love; one brother Tommy Jones of Thousand Oaks, CA; five sisters Paula Tyra of Las Osos, CA, Doris Jones of Avon Park, FL, Sue Thompson of Paragould, AR, Kathy Coots of Jonesboro, AR and Becky (Rick) Hendrix of Lake, AR; along with many nieces, nephews and friends. A private family memorial will be held at a later date so expressions of sympathy should be sent directly to the family. Tri-City LLC Crematory & Funeral Home is privileged and honored to service the family of Ms. Vera Remagen. Online condolences may be expressed at www.Tri-CityLLC.com .

Vera Walline Remagen 84, of Jonesboro passed away at her home on Monday, 26th of April 2021. Born on the 19th of April 1937 in Dexter Missouri, she grew up in Northeast Arkansas and was a graduate of Nettleton High School. After high school... View Obituary & Service Information

The family of Ms. Vera Walline Remagen created this Life Tributes page to make it easy to share your memories.

Vera Walline Remagen 84, of Jonesboro passed away at her home...

Send flowers to the Remagen family.